Thanks to Pat White for unintentionally modeling. I don’t think this will jumpstart my photography career but it worked out pretty well.

It’s not science, but it could be used for science, if I had to chase down fossils or something. Since that’s not really an option, I’ve been using my GoPro Helmet Hero

(the original, non-HD version) to capture some cool things but haven’t had a chance to blog. Here’s a video from END-IT, the Extreme North Dakota Iceman Triathlon, back in March. The disciplines were nordic skiing (doubletrack classic for the most part), cycling (some of it on snowmachine trails), and trail running. Per the END Racing creed, there was a bit of adventure thrown in. At the end we had to sled down a hill and run back up three times.


I ended up getting second overall in this race, which is far beter than how I had expected to do since I’m not a strong nordic skier. If you watch the raw footage, you can actually see where I messed up tactically–since I was wearing a camera on my head, I had to switch mounts twice (once between the ski and cycle legs and then once again between the cycle and run legs). If I hadn’t wasted that time, I may have been able to win overall–but then you wouldn’t have this cool video now, would you?

Since I haven’t posted about this camera

before, I’d like to say a few things. I love it for what it lets me do, but it could be designed slightly better. A lot of people complain about battery usage, but I’ve been having success lately with rechargeable NiMH AAs rather than lithiums. It would be great to have more of an indication from behind whether the camera is recording or not, and recording without a date on the files is annoying. Also mentioned by others is the amount of recording you can do at once; I applied this firmware update and haven’t had any problems (it will let you record for twice the normal time in one file and use a larger memory card). I honestly think it’s a great little camera; it’s rugged and waterproof, it records video, it’s fisheye so you can see a lot more, and you can strap it onto yourself in a variety of ways. Thumbs up.

Seriously. It fell off, and my intestines are spilling out on the floor.

John Scalzi has put up a Flickr album of his trip the Creationsit Museum. People down the hall must have thought I was crazy because I was laughing out loud for so long. Be sure to read the comments; even the most mundane photos have a chuckle from the other people who have looked at them. 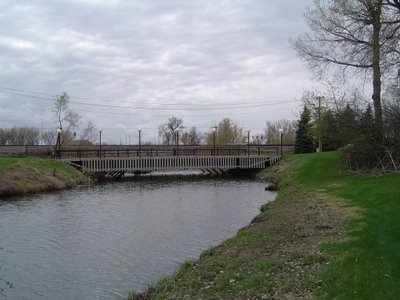 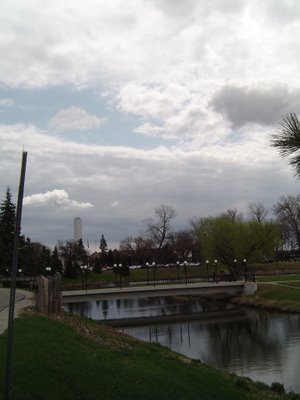 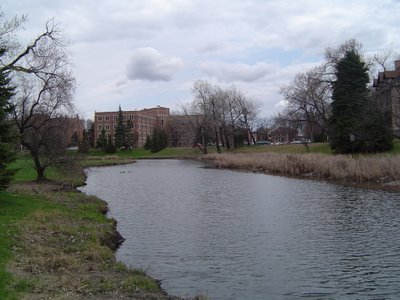 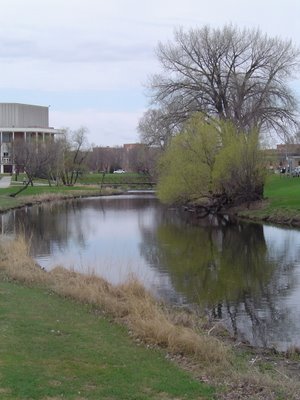 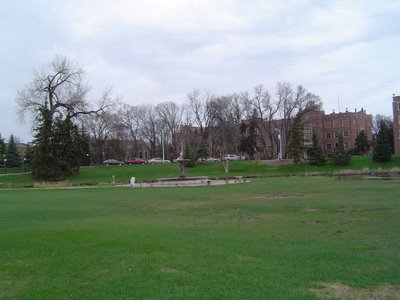 I always take my best photos in the dark. I know it’s a very photogenic subject anyway, but I liked it.

Creativity again…sooner or later I will photograph and upload some drawings I’ve done recently, it’s something a litte different from what I usually do, which tends toward either sculpture or multimedia/video (I even started work on a surrealist film in the vein of Salvidore Dali while in Oz, but I never finished it, due to lack of a good digital camera). Right now I’m working on drawings so I can design a series of logos for this, that, and the other thing, just in case I need them (and maybe you’ll see them sooner than you think). Strangely enough, I have never built a sculpture out of a bicycle. I think this is because I see bicycles as cheap transportation, and using parts that are still valuable to a working machine seems sacreligious. Recently I built a bookshelf out of a pair of skis and some wood from an old dresser, a pretty solid piece of work in itself that kept me occupied for a day or so.

Incidentally, I’m interested in other artistic projects while I’m still here in Vermont, whether they are sculpture or paint or drawing or film or multiedia or writing. I’m looking for people who would like to collaborate.

Speaking of which, before the site disappears (until I find a new server at least), if you are from SLU (or even if you are not, and have a grasp of world events from 2002-2003) PLEASE visit my site on the Green Wall [edit, see Flickr] and drop me a comment here on what you think. I want to put together some sort of ‘world political picture’ book, using some of the imagery and tying it in with events on and off campus from that year. What I am looking for are memories of world events, campus events, whatever, that explain or enhance the stuff I have photographed–you will get full credit if you want it for what you supply, of course. There was so much going on that year that I was unable to write down some of the meanings behind some of the graffiti, and some of it I still don’t understand. By the way, if the pages suggest posting to some forum, don’t post there, please comment on this site only–any forum I may have set up does not exist anymore; at least, it is not active and is not likely to be ever. Thanks for the information.