A while back fellow streets enthusiast and cycling commuter A.K. forwarded me a link to the new South Washington Street Corridor draft plan (which is listed as “final” now).  This post will cover some of my thoughts on the cycling aspects of the plan.

The plan as stated will set aside multiple sections of bicycle “route” (I am using “route” as an indeterminate word for “places designed for cyclists to be”).  They are (from south to north)

Frankly, I’m excited about this plan.  It would create a for-sure, straightforward, north-south bicycle route along one of the busiest corridors in the city.  It would be around 4.6 miles long, probably the longest straight stretch of cycling “route” that we have outside of the Greenway (which, of course, is not straight).  There are a few details that remain to be worked out, however.

So that’s what I think, what about you?  If any of this is confusing, I will do my best to make additional concept maps available so we can all be on the same page.  Like I said at the top: it’s exciting that Grand Forks is putting this much thought into cycling facilities.  If you want to get involved, the MPO has just release the “MPO Citizen’s Guide For Participating In The Transportation Planning Process,” which has information on how to be notified about upcoming meetings, how the process works, and how much of an expert you need to be (I’m kidding, they want everyone’s input).

and sometimes we forget what we got
who we are, and who we are not
I think we got a chance to make it right
keep it loose, keep it tight 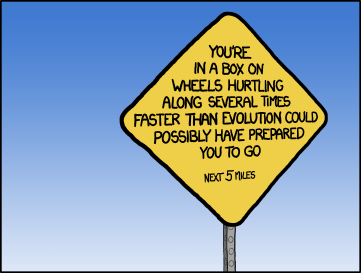 We’ve already seen ideas about creating a south-end Grand Forks/East Grand Forks bypass by building an interchange at Merrifield Road, but now there is talk of one going in one mile to the north, at 47th Ave South–if developer/landowner Guy Useldinger has his way.  What do you think?  If the city is going to invest in more infrastructure (to expand housing and commercial opportunities for investors for example), where should it be focused?

In other news, the plan to widen Columbia Road for a few blocks might be more expensive than anticipated.  No word yet on how bicycle and pedestrian facilities fit into the project.

At a community gathering some time ago, the subject of “bad drivers” came up.  To be fair, some of the driving issues people brought up were related more to bad engineering or design decisions, but most of the irritation seemed to stem from the idea that (other) drivers in Grand Forks are generally selfish.  This may or may not be more true here than in other cities of this size, but I think this line of thinking is due to two assumptions: first, that each of us is (obviously!) a better, more considerate driver than anyone else on the road, and second, that each of us is (obviously!) on a more important errand than all those other people.  This is human nature, but how can we change it?

Gary Howe addresses this idea in a recent blog post “Traffic is a social problem” and what’s needed is “an outbreak of civility.”  The idea (woven in with some others) is that “traffic” is something that’s an outgrowth of the separation from other people that we feel (and perhaps want) when we’re in the public space.  So we box ourselves up in cars.  We don’t make eye contact with other cyclists when we’re on bicycles.  We shuffle quickly inside when we get home from work.  We grill out and eat dinner in the back yard rather than the front.  The public space is left to those who have to be there, not those who have somewhere else to be.

The natural solution to this, as expressed in the above blog post and others, is to make the street a more enjoyable and more natural place to live.  By simply being out there and using the space, we force people to interact and, hopefully, to develop some sort of community.  Once the community exists, everyone shares a social contract.  You wouldn’t track mud through a friend’s living room, so why would you honk your car horn outside your neighbor’s house early in the morning?  Why would you speed down a street that you know your neighbors’ children might be playing on?  Why would you thump your bass when you see your neighbors eating dinner in the front yard?

There are a million different ways to build community, not all of which are as difficult as walking across the street with a strawberry pie.  The links below (and the blog post linked above) outline a number of them.  Which ones should we try in Grand Forks?

Update 2013-07-03: Another good discussion along these lines is given by Shane Phillips about Safe Routes to School.

The problem here, if it is indeed a part of the problem, is ultimately a lack of community. Most people would never harm a child, but when people don’t know the members of their community they can’t always trust them by default. It may be that school districts or another credible institution can step in to bridge the gap and provide a framework for continued growth. For those of us excited about new things in town, or just for those excited to see people get totally confused while driving, here’s some news: according to WDAZ, Grand Forks is getting a roundabout:

The city will turn the intersection of 24th Avenue South and South 34th Street into a roundabout. The only similar one here in town is currently at the airport. [“similar” because it’s more of a wide spot in the road than a roundabout; one additional road merges through the circle to exit the airport.]

Construction is scheduled to begin next summer and it’s estimated to cost more than $500,000. Federal funds will cover 80 percent and the city will pay the other 20 percent.

There has been increased traffic along 24th Avenue South and drivers trying to turn onto that street have experienced more delays and traffic congestion.

Roundabouts, traffic circles, and rotaries (not all the same thing), are obviously confusing to a driver or cyclist who is not familiar with how they work, but then again, so is driving around any new kind of structure or local custom.  People will get used to it, and we’ll get where we’re going faster, without having to waste money and electricity on signals (or time and fuel sitting at a stop sign or light).

My only real criticism of this plan is that it might encourage faster driving through the 25 mph residential area to the northwest.  Thoughts?

With everything else that’s been going on in my life, I’ve been a little lax in the streets-related posting lately.  The other stories will be coming out, but here’s the most recent from the Grand Forks Herald:

EGF’s Economic Development Housing Authority approved a package that will produce a four-story, 39-unit apartment building on the corner of DeMers Avenue and Fourth Street, two blocks from City Hall and two blocks from the Boardwalk.

The City Council needs to make the agreement official, but resistance is not expected. “Looking at restaurant row and the entertainment district, this fits in very, very well,” said Barry Wilfahrt, president and CEO of the Grand Forks and East Grand Forks Chamber of Commerce. “It builds density downtown.”

The site also will have 6,500 square feet of commercial space. But the apartments — which will be the tallest building in the city — will be the focus. [emphasis added]

That’s right.  Not only will East Grand Forks be home to more downtown apartments (which will continue to build the downtown ‘scene’), they will be the tallest building on that side of the river!  Not only that, but the downtown will be given over to commercial space.


UPDATE: both Tom Dennis (Grand Forks Herald) and Grand Forks City Councilmember Tyrone Grandstrand have recently written opinion pieces in support of more housing.  Grandstrand is in favor of more mixed-use development designed to give college students and the “youth” set alternatives to renting homes that could be better used by families.

Nope, I’m not going to come down on one side or the other of any of the choices today.  It’s up to you to do your own research.  If you need help, check out www.gfvote.com, a neutral site sponsored by the Greater Grand Forks Young Professionals.